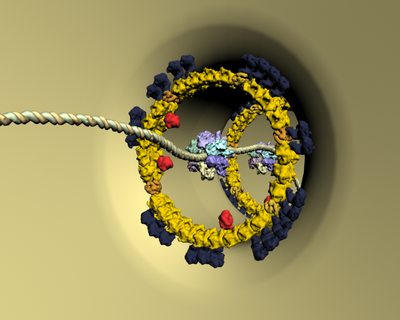 A very first modelling of the bacterial septosome. The 3D scene can be downloaded from the Download section.

In E. coli, at least 11 proteins are known to participate in the division process : FtsZ, ZipA, FtsA, ZapA, FtsK, FtsQ, FtsL, FtsB, FtsW, FtsI, FtsN. An early step in bacterial cytokinesis is the formation of a FtsZ ring like structure at the site of septation, which contracts as the cell divides. Strucural and microscopic studies led to the proposal that FtsZ may function as a cytoskeletal element in prokaryotes, analogous to tubulin in eukaryotes.

Before cell contraction, FtsA, ZipA, ZapA and FtsK are recruited at the FtsZ ring. FtsA, ZipA and ZapA have been shown to interact with FtsZ, to drive its polymerisation and to promote FtsZ filament bundling thereby contributing to the spatio-temporal tuning of the Z-ring. Additionnal functions of FtsA and ZipA may be to link the membrane with the FtsZ rings in order to stabilize or organize the rings. FtsK is a DNA translocase that coordinates chromosome segregation and cell division in bacteria. In addition to its role as activator of XerCD site-specific recombination, FtsK can translocate double-stranded DNA rapidly and directionally and reverse direction. Finally, FtsA and FtsK seem to interact with and target other division proteins and their lack results in a cell unable to contract.