Getting started – To be read first

A great tool: The VCR player

Bruno Levy and his team at INRIA-LORIA developed a very useful tool: The VCR player. This tool records every action carried out by the user. When Graphite-LifeExplorer crashes, the user can replay the sequence up to one step before the crash. The 3D scene is exactly like before the crash, and the user can keep on working.

Like any other tool, GraphiteLifeExplorer can crash. When this happens, press a button and everything is like before the crash! (by D. Larivière, Fourmentin-Guilbert Foundation and S. Hornus, INRIA-LORIA).

To get the VCR player operational, proceed this way:

First the VCR player is to be configured (just once) in order to use it each time you use Graphite-LifeExplorer:

1/ Go to your file explorer, and create a subfolder called VCR player in the folder corresponding to the current release of Graphite-LifeExplorer: 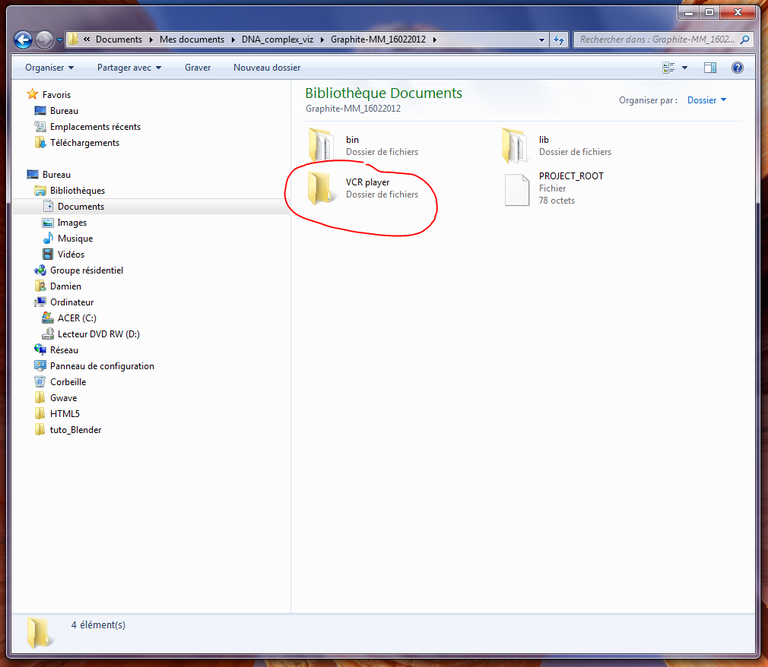 3/ In the File Menu, select Preferences, a window opens with several tabs, select the last one VCR, Click on the icon on the right side of VCR filename: 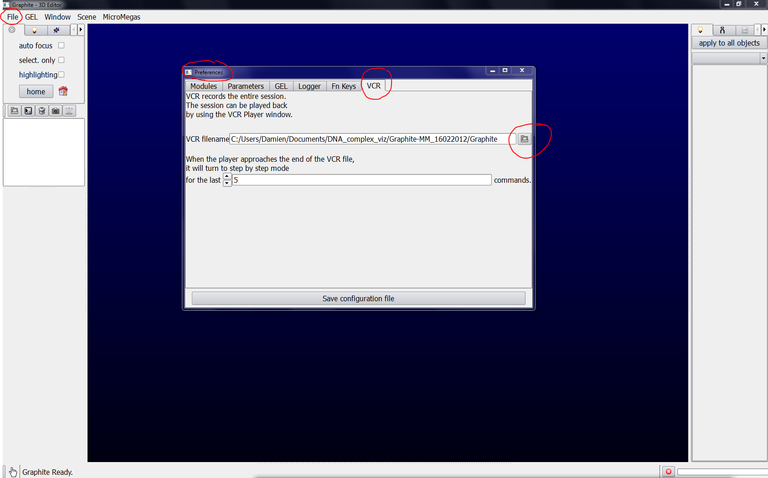 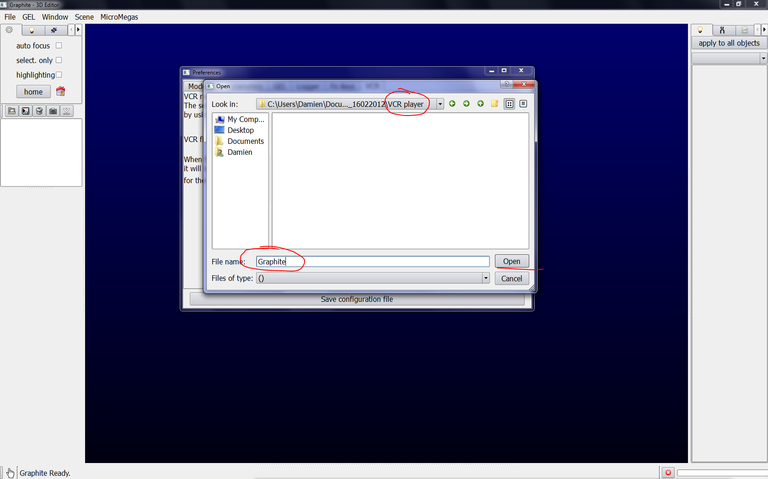 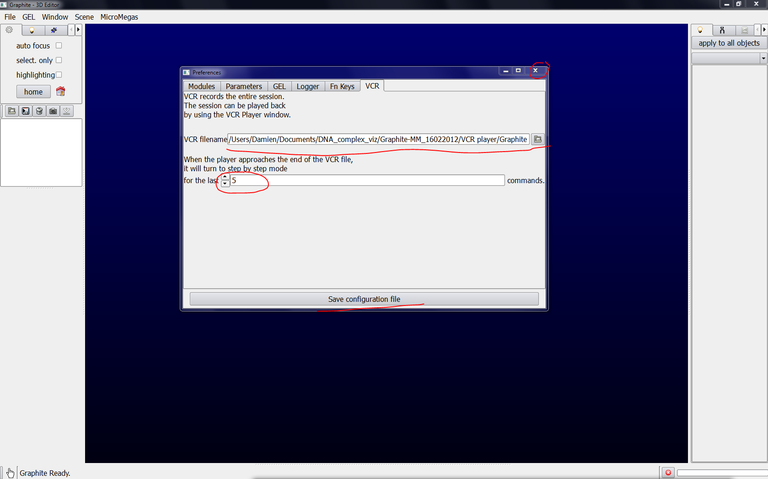 7/ Go to your file explorer and verify that a file called Graphite (without any extension) does exist in the folder VCR player:

Now the VCR player is configured.

Let’s see how to use it via two examples:

9/ From the Graphite-LifeExplorer window, load a pdb file. The corresponding structure is displayed in the main window: 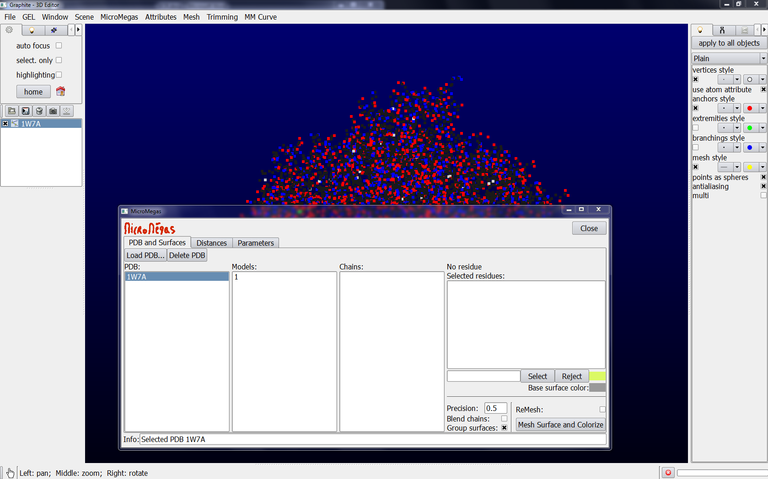 12/ Go to the Window menu and select VCR player: 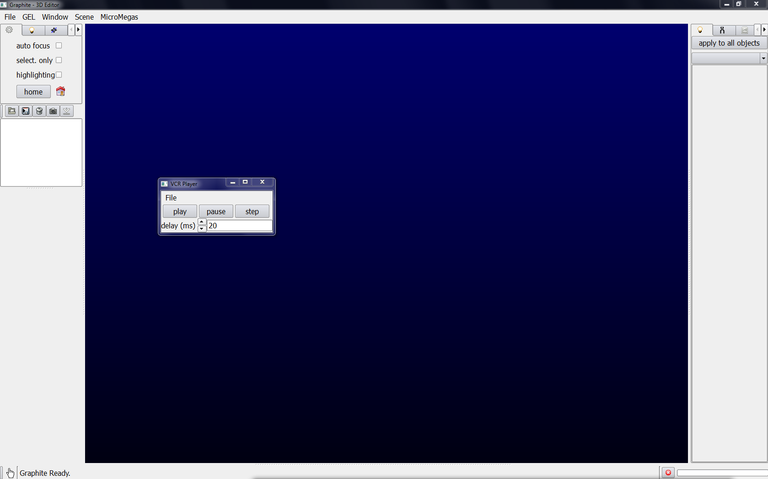 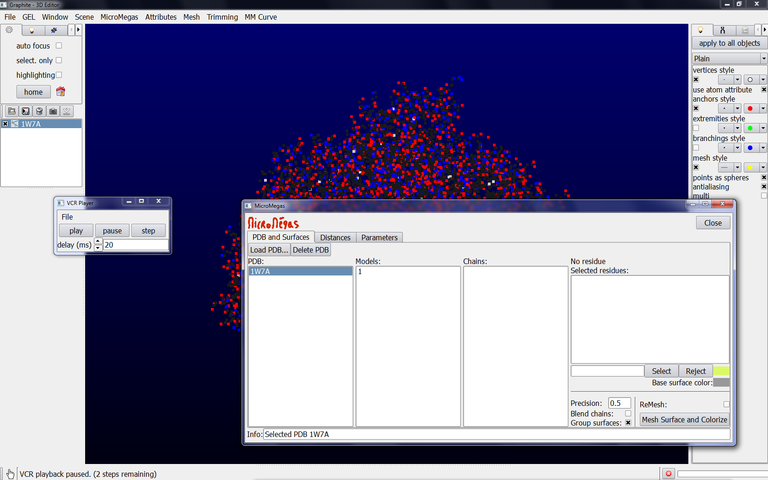 If you press play again two more times, the software will close.

Let’s see another example to get a complete understanding of the VCR player. Now we are going to carry out more steps:

14/ Quit Graphite-LifeExplorer  if it is still running

16/ From the Graphite-LifeExplorer window, load a pdb file. The corresponding structure is displayed in the main window.

17/ From the main window, go to the light tab, select molecule and size 1: 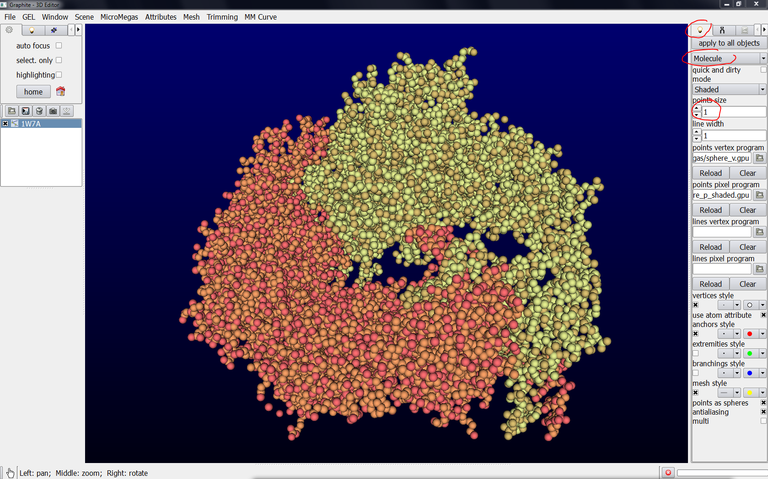 18/ Zoom off to get a camera position like in the image below.

Note: To move the camera you can 1/ go to the Tool tab and click on the Hand tool and then exploring the 3D scene thanks to the mouse buttons (left = pan movements, right = rotation, middle = zoom in/off) or 2/ keep pressing the Ctrl key and use the mouse button. 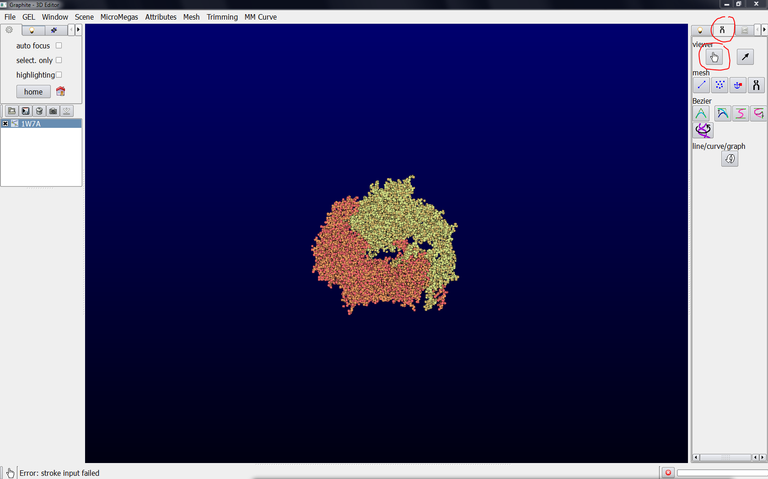 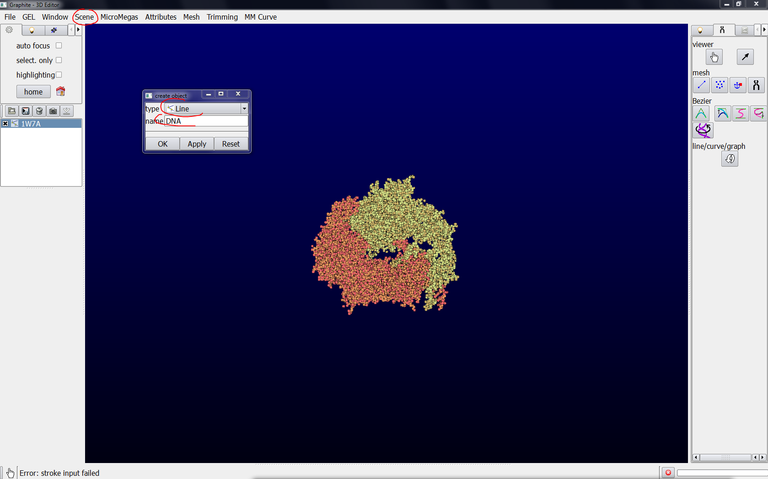 20/ Go to the Tool tab, click on “ Create quadratic Bezier curves”, and add control point in the 3D scene as shown below: 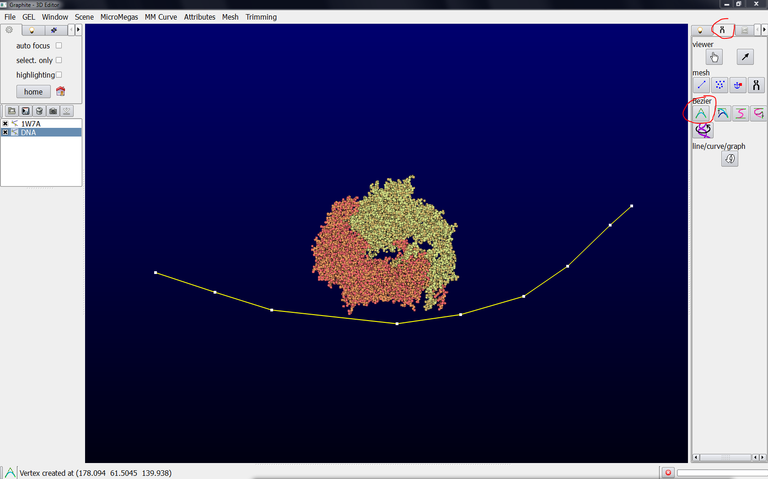 21/ Go to the Light tab, select Curve, and Atoms in option: 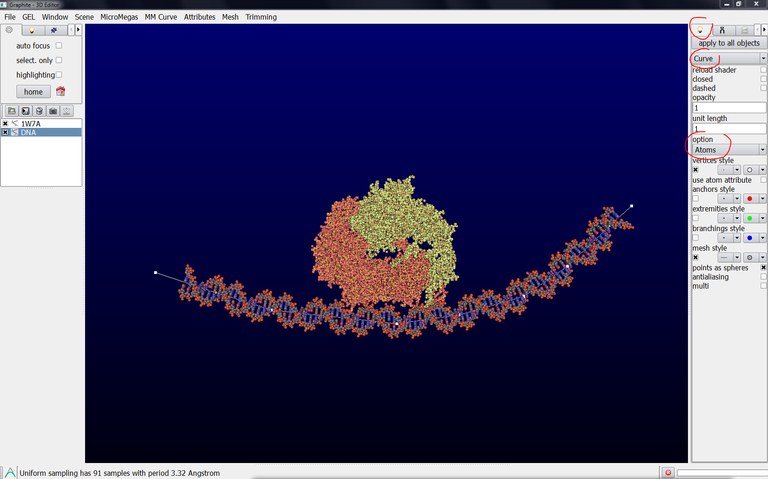 24/ Go to the Window menu and select VCR player. Press Play: The sequence of all the actions carried out before closing the software is replayed… up to this step: 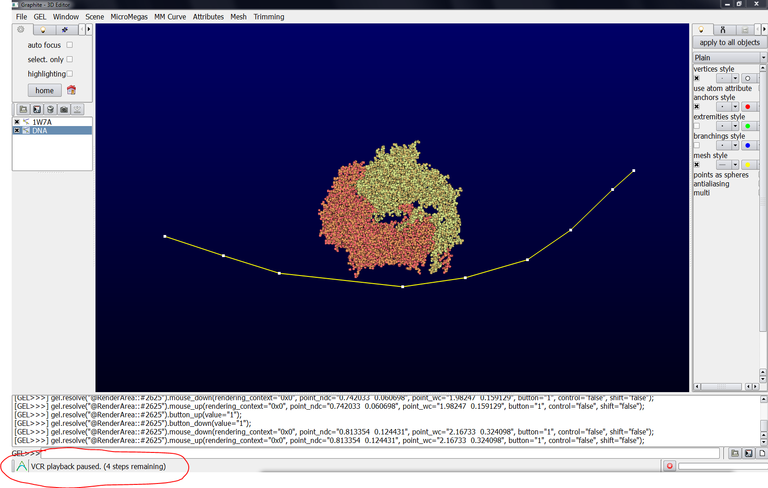 25/ You can see in the image above that DNA has no atomic rendering although you selected such a rendering. At the bottom of the screen, you can read VCR playback paused (4 steps remaining): Now press Play several times up to see the expected atomic rendering: 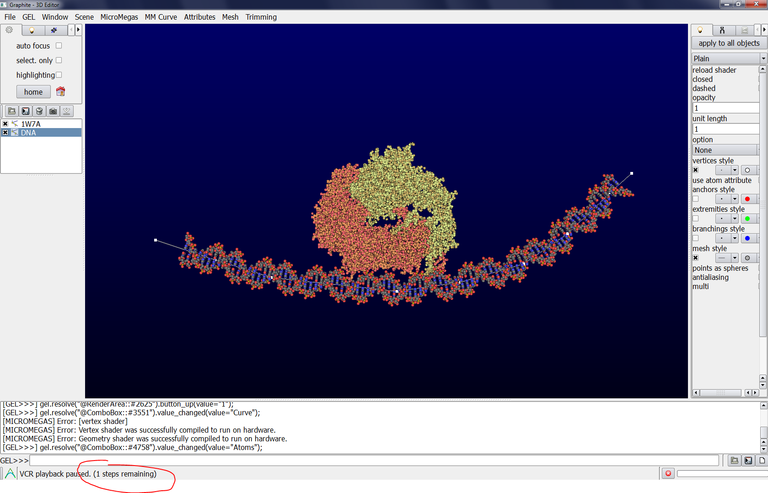 This example shows that the VCR player plays a sequence back and stops 5 steps before the end: These are the 5 steps selected during the configuration phase (step 5).

The main window (image above) indicates “VCR playback paused (1 steps remaining): If you press Play again, the software will close since it was the last action you did. So, if you did not close the software like in this example, but rather the software crashed, do not press play once the reminder indicates “VCR playback paused (1 steps remaining)” since the last step resulted in the crash. Just close the VCR player popup window and do what you wanted to do at the instant of the crash: It is likely that the crash resulted from stability problem and that it will do not occur again. If the crash occurs anyway, you are facing a bug. In that case, proceed as follow: Do not launch Graphite-MicroMégas right after the crash, go to the bin directory (where graphite.exe is located), attach graphite.log in an email and send the email to samuel.hornus  at  inria.fr 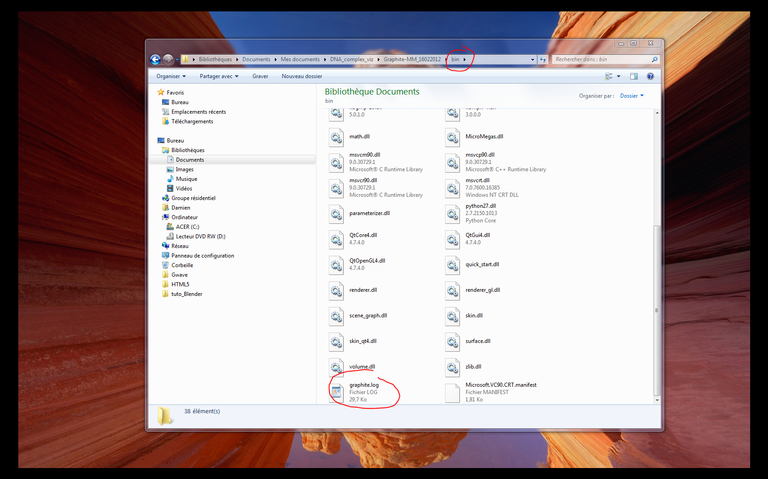 Starting DNA modeling from scratch: What you must be aware of

This short tutorial aims at recalling not to start from scratch a DNA modeling from an empty scene. (by D. Larivière, Fourmentin-Guilbert Foundation and S. Hornus, INRIA-LORIA) 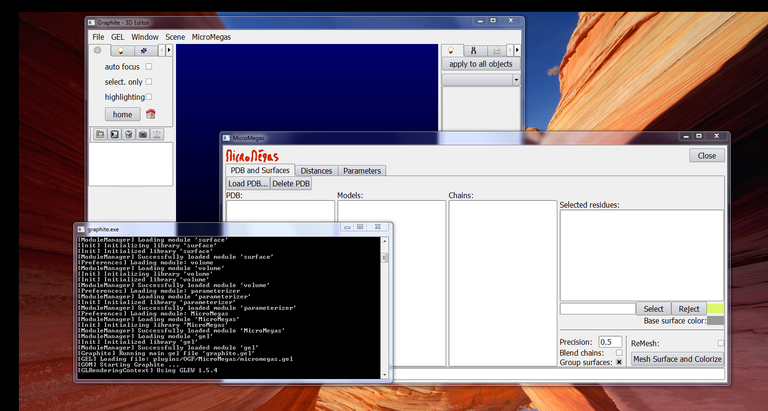 2/ At start, the scene (in the main windows) is empty: 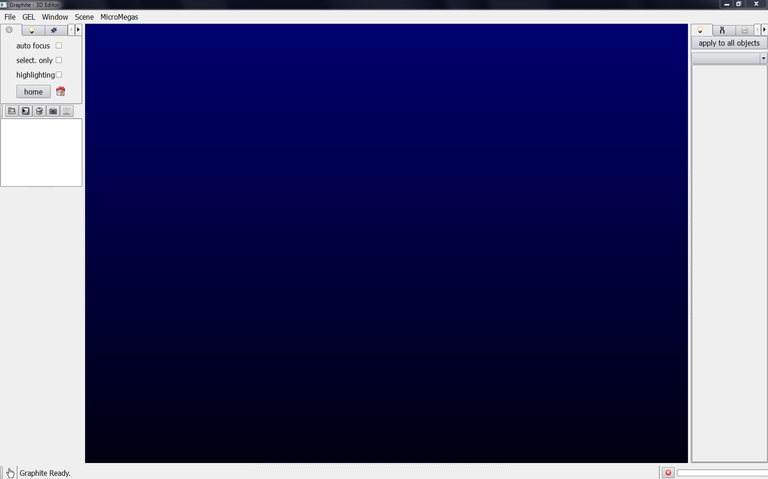 3/ From the  Graphite-LifeExplorer window, load a pdb file… 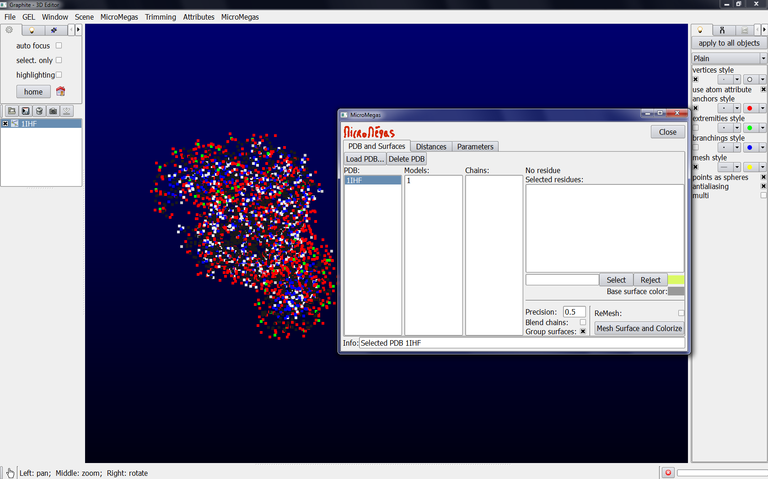 … or from the main window load an existing model: 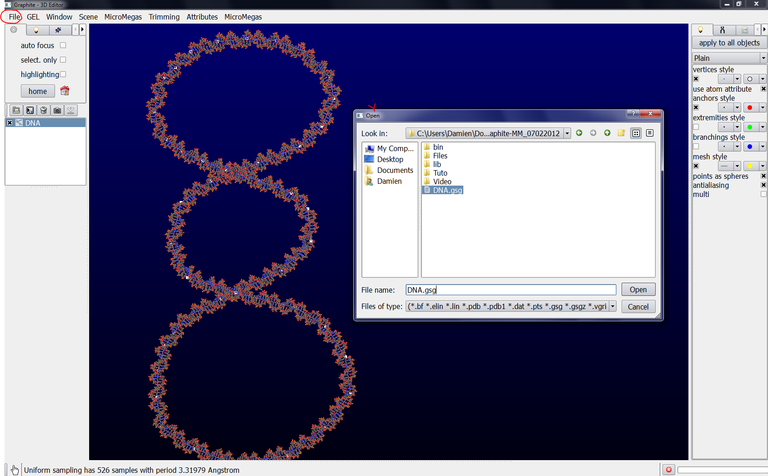 4/ Once the scene is no more empty, start to draw your DNA model: 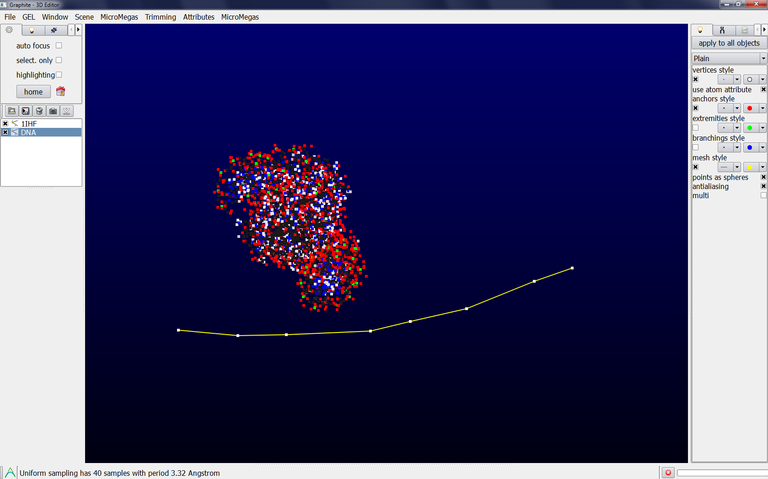 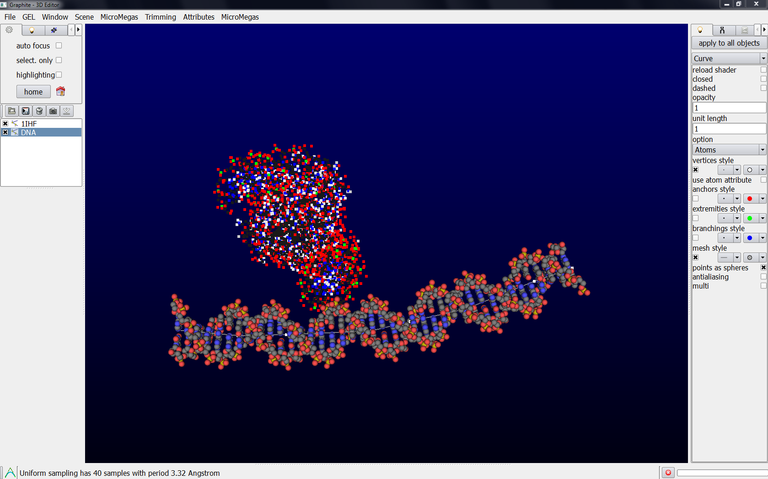 5/ Now you can delete the protein and keep on drawing the DNA (of course, keep the protein if it is useful): 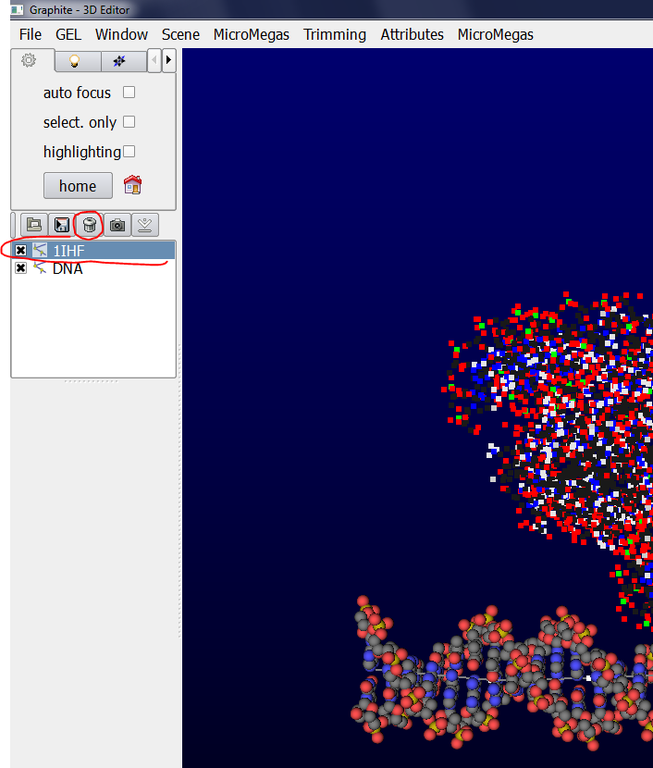 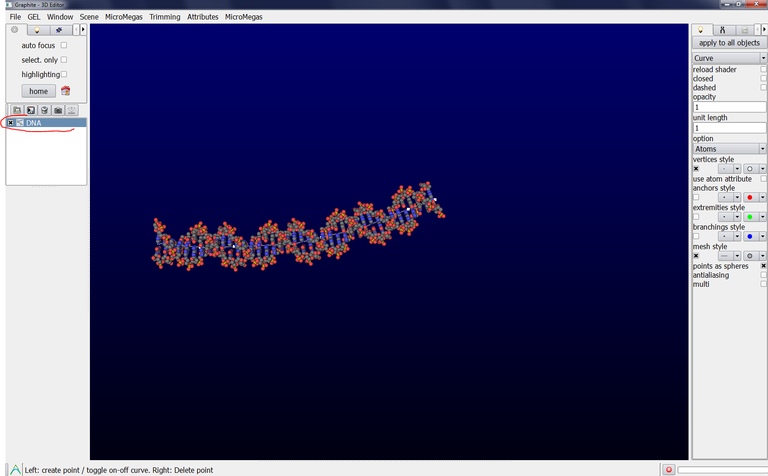 Conclusion: The key information is not to draw DNA from an empty scene. Why?

If you draw the DNA without any scale reference in the scene, you will probably draw a line smaller than one base pair (even if you add several control points) which is the minimum length to get atoms displayed.